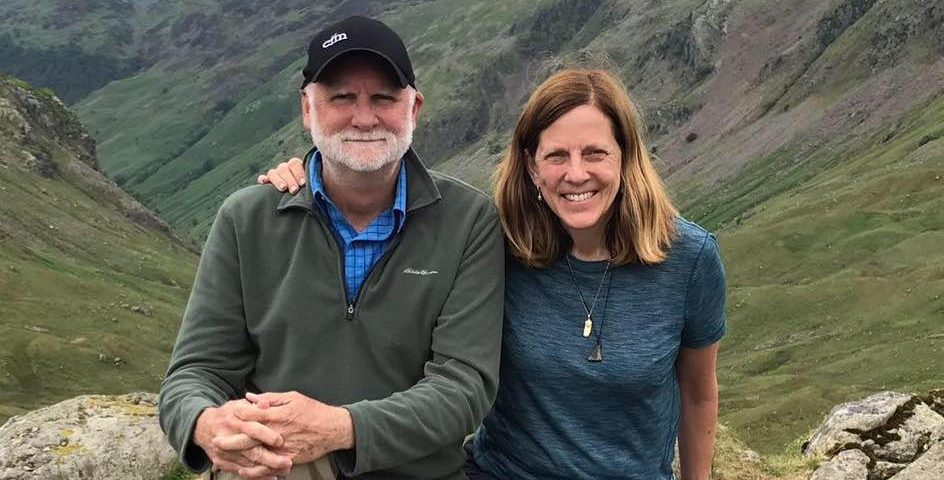 Oli Today > Blog > Letter from Head of School Will Laughlin: The Sea Cow of Hope

Hanging in the entryway of our condominium in Biddeford Pool, Maine, is a painting of a cow. It is a giant, colorful, audacious painting. The cow is wearing spectacles and appears simultaneously amused and annoyed, perhaps at all the attention he receives (mostly from me). He shares his canvas with a collision of letters and flags—the entire nautical alphabet—and seafaring symbols and secret messages to my son, Colton. Besides a painting by Chagall that made me cry the first time I saw it in a small gallery in California (Jacob’s Grief), this is my favorite painting in the world. Unlike the Chagall, this painting does not make me cry; it makes me smile and helps me breathe.

The painting was a gift from a man I love and admire. His name is Tom Townsend and he is married to someone else I love and admire — Oliverian’s board chair, Jeanne Townsend. Calling Tom a painter is a little like calling Leonardo Da Vinci a painter — it’s true, but is a gross understatement. Tom is more of a creator. He takes scraps and pieces from his life and turns them into writings, music, businesses, non-profits, and most recently, paintings.
He told me last year that he was “into painting cows now” and asked if I would like one for my son, Colton. I said yes. Any special requests? Well, could you please make it huge and incorporate a seafaring theme? Tom nodded. Seafaring theme. Yes. As in…the ocean. Yes. You know it’s a cow. Yes. Like the cow he would soon paint, Tom looked simultaneously amused and annoyed.

A few months later, a truck arrived with a giant crate that took four people to unload; in the crate was the Sea Cow. Some of the scraps and pieces of Tom’s life would not seem like material for whimsical sea cows, or books about hope, or non-profits that give pianos away, or foot-stomping honky-tonk jams. He has experienced great success, yes, but also grief and setbacks. Most profoundly, Tom and Jeanne carry the loss of their eldest son, Alex. One of Oliverian’s first and most celebrated graduates, Alex matriculated to a top art and design university in Savannah, Georgia. During his sophomore year at SCAD, just as his life was finding its fullest expression, Alex was killed in a car accident. Tom and Jeanne’s consistent response to this and other difficulties has been to create, build, give, and grow. To defy the darkness. To hope.

They established the Alex Townsend Fund to ensure that other students would receive the same life-changing education that Alex received. They launched an annual music and arts festival in Savannah, Georgia, to share Alex’s passions with the community he loved. Tom wrote a book about loss and hope. Jeanne took over the board leadership of Alex’s high school. Tom gives away pianos and music lessons to families who can’t afford them. He paints happy cows and gives them to other people’s children.

Tom, Jeanne, and their adult children, Nate and Laura, consistently demonstrate one of the key beliefs of Oliverian — the belief that setbacks and trials and even tragedy don’t have to destroy us; in fact, they can make us deeper and better. We are not fragile. We are not “merely” resilient. We are transcendent, if we choose to believe it. The Townsend’s example of this belief has been a constant inspiration to me in my work at Oliverian. It is proof that our deep faith in our students’ transcendence is not misplaced; that the hope we preach — hope that more and better can emerge from the manure of disappointment — is also something we practice. Many families see that proof when they sit down to play a piano they never thought they’d own. Or dance to joyful music from a heartbroken man. I see that proof whenever I look at the Sea Cow.

The Townsends consistently make the radical and rare choice to express their grief as love because they know that, really, grief is a form of love.

The Townsends have a new grief, which is why I am writing this note. There is no delicate way to say what happened and if there were I would not use it because there is nothing delicate about it. Three weeks ago, while driving home from an event related to his Pianos for People non-profit, Tom was shot in the face during a carjacking. The bullet shattered his jaw and passed through his neck. After two weeks on a ventilator in an induced semi-coma, he finally, suddenly, emerged from the cocoon of anesthesia straight into the shock and pain of full consciousness. He is now breathing on his own, albeit through a thick, blue trachea tube, and is recovering from the second of many anticipated reconstructive surgeries. The bullet missed his tongue, missed his spine, and did not cause neurological damage. He is alive.

Already it is clear that Tom will be his usual defiant, transcendent self in the face of this violent act. He scrawled a note to Jeanne the other day, fresh out of his coma, making the audacious request to “drive to (my) studio to paint” so that he could “get on that horse faster.” Never mind all the hospital machines and staff he’d have to drag along with him. The man needed to paint. A few days later I received a video of him sitting up in his hospital bed, varicolored tubes surging from every part of him, a familiar hyper-focused expression on his face, jamming on a tiny keyboard. That kind of hopeful defiance is immensely reassuring to those of us who love him because we have seen it before and we know the outcome. He will make stuff. Whether a song or an act of philanthropy or a sea cow (Tom…I’m thinking maybe a space cow next?), this stuff will make Tom’s hope visible. It will heal him…and the rest of us, too.

Thanks, Tom and Jeanne. We love you.

We invite you to participate in a schoolwide effort to make hope visible for Tom in the form of pianos for his non-profit Pianos for People. One piano costs $750 and will change the life of a family near the part of St. Louis where Tom was attacked. How is that for defiant hope! To be part of Oliverian’s effort to make this hope visible to Tom, donate online at www.oliverianschool.networkforgood.com, or send checks to:

Just be sure to indicate that it is for Pianos for People in the memo! Thank you!