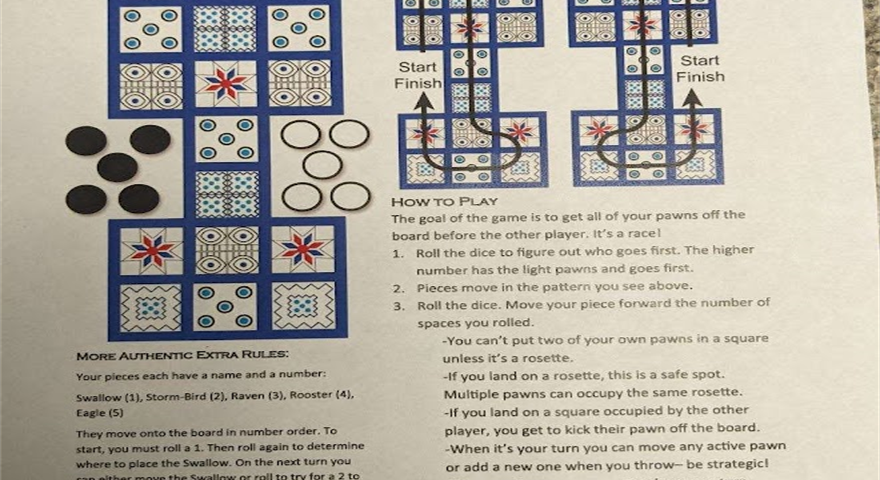 I wanted to teach students about the Royal Game of Ur and have them play it to feel a tangible connection to the past.  Sometimes when we read ancient laws or poems like the Epic of Gilgamesh, the past feels so foreign and distant.  However, if students can play a game that people played thousands of years ago and get some enjoyment out of it, they can start to see how ancient peoples were human just like us, and, in a way, form a real connection with people who died centuries ago.

The Royal Game of Ur was discovered by archaeologists at the Royal Cemetery at Ur.  The game is at least 4,500 years old and was invented by the ancient Sumerians.  When archaeologists first found it, they found the board, dice, and pieces, but no rules.  Luckily for us, Irving Finkel discovered a Babylonian cuneiform tablet that dated to the second century BCE in the British Museum’s collection.  He deciphered it, and discovered that it actually contained the rules for this game.  The tablet was much younger than the game boards found at Ur, so that means that this game was likely played for centuries.

Before playing the game, students watched the video below, with Irving Finkel, an Assyriologist at the British Museum, who explains the rules of the Royal Game of Ur and plays the game with Tom Scott, a famous YouTube personality. Irving Finkel is one of the experts responsible for deciphering the ancient game.

I didn’t know if playing the game would work.  I had learned the rules to it, but I had never actually played it myself.  It was a bit of an experiment to see if the game would be fun and playable.  It turned out, the game was a lot of fun!  Students got pretty competitive, discussed strategies, debated the minutiae of the rules, and overall, had a fantastic time.  Students actually still ask me if we can play the game again in class!

Should you ever wish to try your hand at the Royal Game of Ur, check out the instructions here!