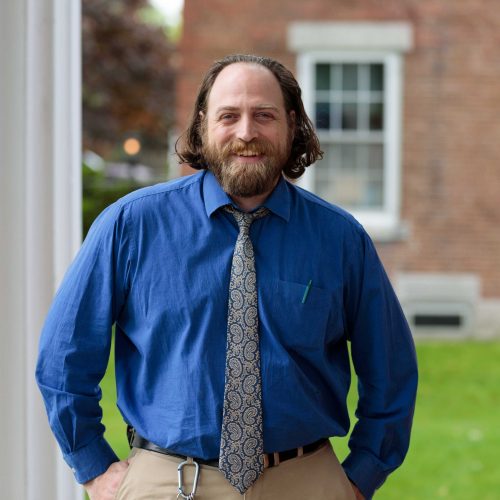 Micah E. Weiss, Dean of Academics/Humanities Teacher, focused his college studies on his writing, staying up all night drinking coffee, playing chess, and arguing about things he wouldn’t really understand until later in life (and some that still baffle him).

Micah graduated from the City College of New York in 2006 with a degree in English literature, and not long after started his career as a teacher. He has spent eight years teaching in a public high school in the Bronx, NY. In that time he taught a variety of subjects including English, global and US history, as well as several creative writing courses. In 2013, he earned an MFA in Writing from Sarah Lawrence College. That institution’s tradition of professors and students building strong personal relationships together is something that has influenced Micah’s teaching practice. He has found Oliverian to be a learning environment that is particularly suited to building strong relationships with students.

Micah is joined by his wife, Betsy, an artist who homeschools their three children, Alden, Eowyn, and Athena. Micah loves writing, reading canonical and fantasy literature, religious and medieval history, and transcendental philosophy. Micah can be found playing any number of strategy games with his students and children, laughing at bad sci-fi movies or discussing feminism with his wife, or decrying the nihilism of postmodern and continental philosophy.
He still enjoys staying up at night drinking coffee, playing chess, and arguing, though he admits his days of pulling all-nighters are long past him.

What do you love most about Oliverian?
“I love Oliverian for the close-knit community and the chance to build truly deep and personal relationships with students and staff.”

What motivates you to work with kids?
“Growing up, my friends and I had an impersonal and alienating experience in high school except for a handful of teachers who have continued to inspire me. I hope that i can have the kind of impact on young people that they had on me.”